In addition to JV Wrestling Saturday at Castle High School, it is also their Band Craft Show.  In year’s past, it’s been a major congestion with the two events going on so Castle is trying something a little differently so that it’s not such a hassle on the wrestling fans. 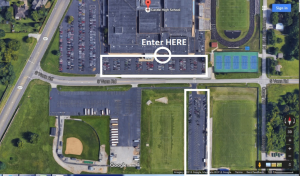 ttached is a map that shows the areas designated for wrestling parking (south side of building and soccer lot) and the entrance (Entrance/Exit D next to the greenhouse) for wrestling fans.  This is the ONLY entrance wrestling fans will be allowed in without being charged for the craft show.  Please pass this on to other MVHS Wrestling parents/fans who might plan on attending the JV Invite at Castle HS on 12/3.  JV Wrestlers will compete on mats 5 & 6 at Castle.