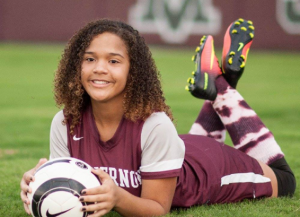 MVHS is proud to announce that Arianna Wilkerson will be playing collegiate soccer for Head Coach Joe Basch at Kaskaskia College.  We invite you to join us for her signing on Friday, January 31, 2020 at 3:15 pm in the MVHS Athletic Foyer.

Arianna Wilkerson is the daughter of Josiah and Ann Wilkerson. Over the years she has been playing and improving her skills on the soccer field playing multiple of positions, but mainly playing Mid-Field defender. Arianna started playing little league soccer when she was 12. When she got to High School, she proved her dedication to the sport on and off the field. Her sophomore year during track season, Arianna set the new record in the Girls 100m High Hurdles. She lettered all four years in soccer accomplishing the best defense award, MVP and player of the game and assisting her team in battling for the conference championship as they fell short. All four years of High School she has played on the varsity team under coach Samantha Schu and other coaching staff with her stats that are as follows according to MAXPREP.com:

Arianna then received a phone call from Joseph Basch who is the Women’s Head Coach at Kaskaskia College who invited Arianna to come to the College to speak with him and to display her skills. Reluctantly, she did and displayed what she learned to obtain a spot on the team. On January 15, 2020 she received the response she hoped for an offer to play college soccer at Kaskaskia College. Though the position she will be playing at the College is not set, she has accepted the offer as Coach Samantha Schu has prepared her to play any position within the sport.

Arianna chose Kaskaskia College because of the coach’s knowledge of the sport and what he promotes to have a successful year in playing soccer as well as the nursing program that will provide her with everything she will need to work in the nursing field. Arianna wants to make a difference in the field. The program Kaskaskia College offers is strategic and allows students to be able to apply knowledge and skills necessary to provide nursing care to patients of various ages in a variety of settings including hospitals, long-term care facilities, clinics, physician’s offices, and community agencies.

Kaskaskia College is located in Centralia, IL.  It is an NJCAA college affiliated in the Great River Athletic Conference (GRAC).

Congratulations, Arianna!  We are proud of you and wish you the best of luck in your exciting opportunity to play soccer at the next level!