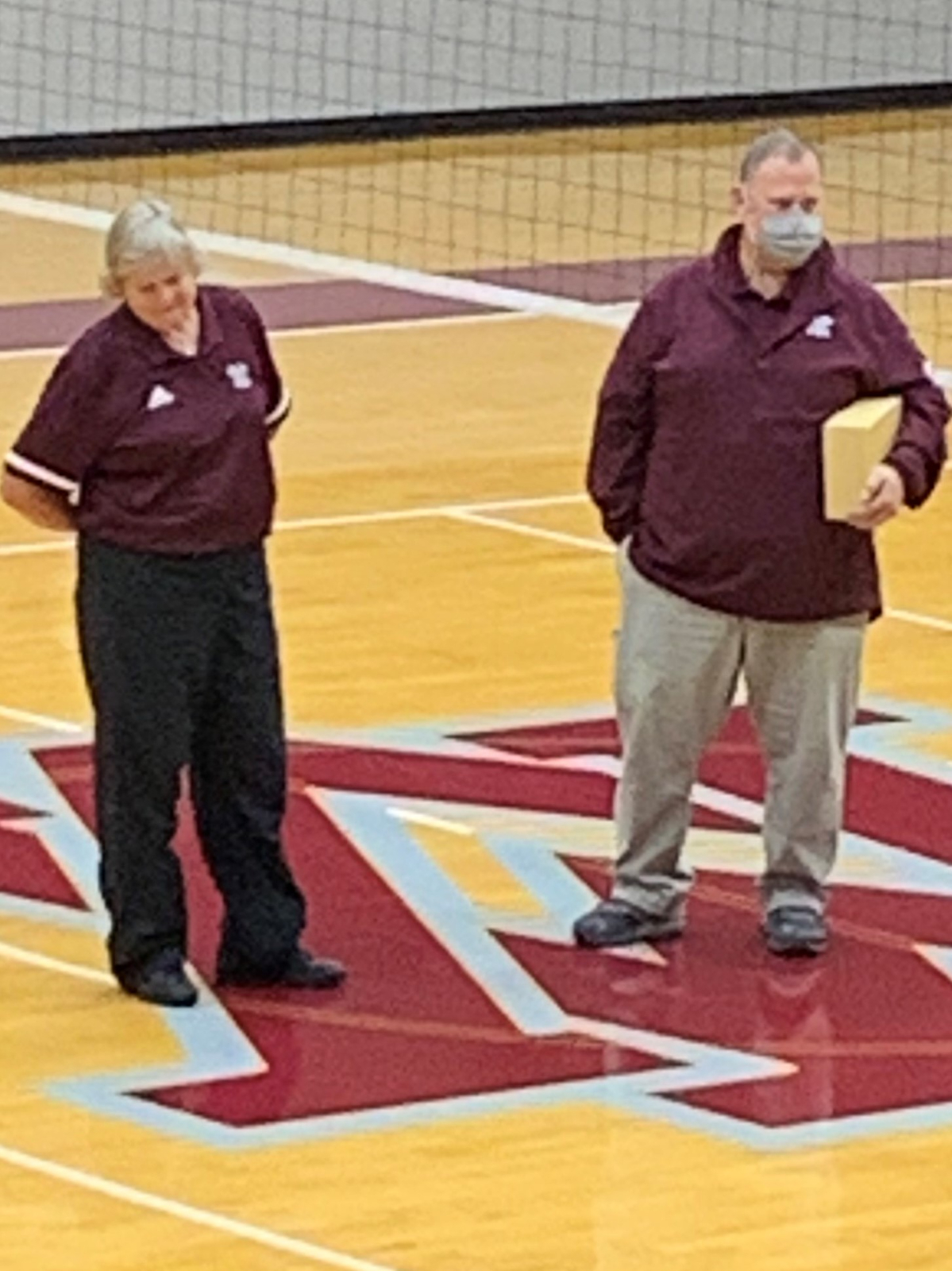 Darla Edwards, former varsity volleyball coach, teacher and student council sponsor at Mt. Vernon High School, retired from Mt. Vernon this past spring.  Since her retirement from coaching, she has served as the sectional hostess for Mt. Vernon High School for both Volleyball and Girls Basketball sectional events.  This evening, we had the opportunity to recognize her in front of the Mt. Vernon crowd and thank her for all that she has done for us.

Darla is a true southern Indiana product born and raised in the small town of Leopold located in Perry County, Indiana.  Her mother and father taught Darla, her brother, and two sisters the true meaning of hard work and service to others as they themselves served in public offices and on the local school boards. All of the girls in the family have had lengthy careers in education and coaching.  While growing up, Darla’s athletic career began with GAA days in Jr. High, but was soon expanded as the growth of girls’ sports in Indiana was just beginning.  By the time she was a senior in high school, she was able to participate in volleyball, basketball, track, cheerleading and AAU softball in the summers.  She followed her sisters to the University of Evansville to pursue a career in physical education and biology.  While at U of E, she went out for every sport that was offered to the female athlete. Upon graduation from college, she had earned 14 varsity letters.

Her first coaching job was at Evansville Mater Dei as a reserve volleyball coach and two days later became the head tennis coach. The following year she became the head volleyball coach and her coaching career at Mater Dei concluded with 8 sectional, 2 regional, and 1 semi-state championship and her 1985 appearance at the volleyball state finals was one of the best experiences in her career.  The next step in her career was coaching volleyball for seven years and softball for five years at Evansville Harrison where her teams won 2 sectionals and 1 regional with an 11 inning win over state powerhouse Boonville.  In 1995 she began an 11 year coaching career in volleyball at Mt. Vernon winning 3 sectional titles.  She was also the founder of Evansville’s first USVBA volleyball club in 1983 and served as its director for 11 years.  Although she retired from high school coaching in 2007, she was still very active with the feeder programs, Mt. Vernon Junior High volleyball and many camps across southern Indiana. 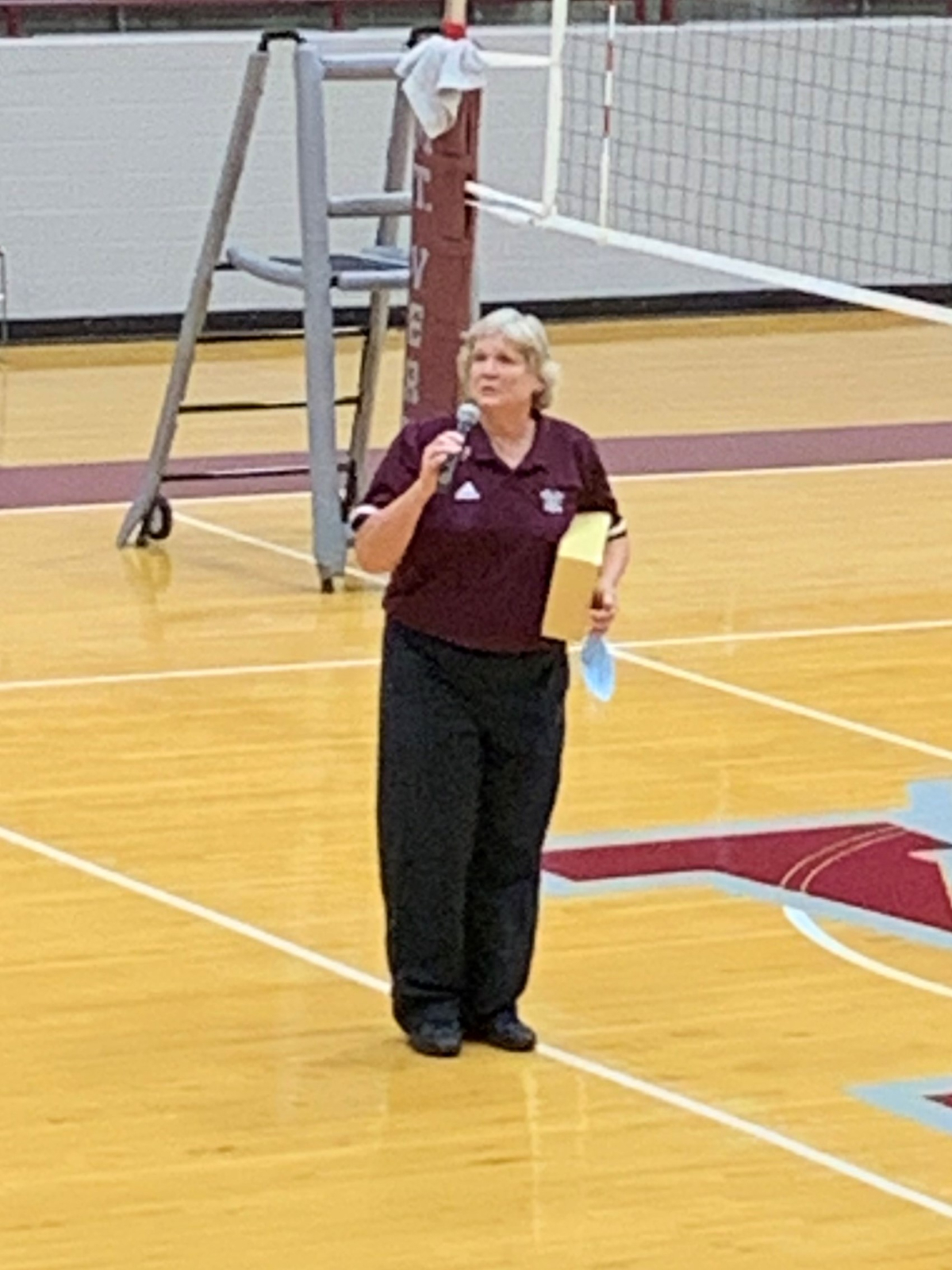 In 1986 Darla received Indiana Coaches of Girls Sports Association (ICGSA) District 5 Volleyball Coach of the Year.  For over 15 years Darla served on the ICGSA Executive Board as the District 5 representative, where her insight, input, and passion on the many issues that were brought to the meetings were invaluable.    In 2011, the ICGSA bestowed upon her one of their highest honors: Phyllis L. Tubbs Service Award.

Darla’s personality and her contributions to Mt. Vernon High School have been sorely missed since her retirement.  Tonight, Mt. Vernon High School chose to honor Darla for her service not only to MVHS, but also to recognize and thank her for being a pioneer in the world of female athletics in the state of Indiana.

Coach Edwards – thank you for all you have done for so many of us over the years!  We thank you, we admire you, we congratulate you on your retirement!

And, we can’t miss this opportunity to share a quick video…  #ALLIN  #WEAREMV